The 10 Greatest Engineers of All Time 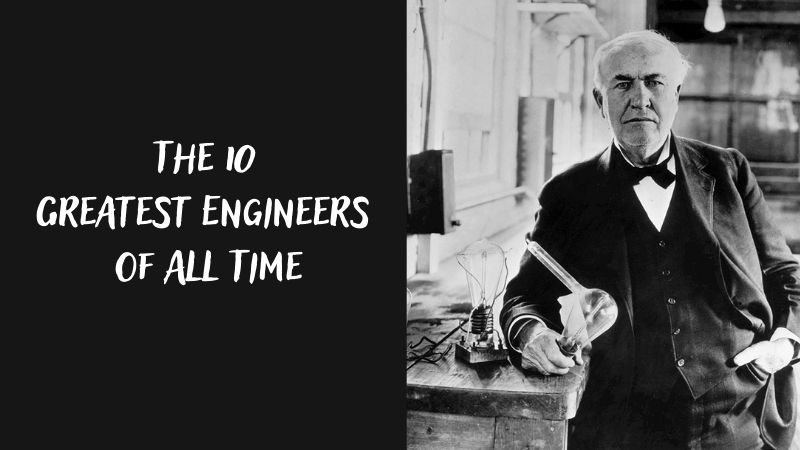 Who are the greatest engineers of all time? This is an open question, to which there are no right and wrong answers, only opinions, theories and discussions. Below you can see our point of view.

Nikola Tesla is the undisputed leader of the list. A Serb who moved to America at the age of 28. He worked for Thomas Edison. Perhaps he is the most underrated electrical engineer who did not receive well-deserved fame. But, without a doubt, his influence on the modern technical level of mankind can hardly be overestimated. His inventions include induction (asynchronous) electric motor (US 1888 patent), 3-phase electricity, fluorescent lighting, Tesla resonant transformer (US 1896 patent), AC power generation and transmission systems, and much, much more. By the way, in many countries, Nicola Tesla is very reasonably considered the inventor of the radio (patent for a radio transmitting device with a resonant transformer in 1891). In the same year, giving public lectures, Tesla described the principles of transmitting radio signals over long distances. In 1893, Tesla patented a radio transmitter and invented a mast antenna, which is used in 1895 to transmit radio signals over a distance of 30 miles.

Thomas Edison was a very prolific American inventor and a brilliant businessman. He had 1097 patents. His inventions include a vacuum lamp, a phonograph, a movie camera, and a movie projector.

Archimedes was an ancient Greek scientist, mechanic and mathematician, physicist and astronomer, who had a tremendous influence in many areas of natural science, laid the foundations of many modern design solutions. And, although little is known about his personal life, Archimedes is certainly one of the greatest engineers in the history of mankind.

Nikolaus Otto was a German engineer and self-taught inventor, known as the inventor of a 4-stroke internal combustion engine. Now, these 4 steps are fuel injection in a mixture with air – compression of the fuel mixture – combustion – exhaust seem to be taken for granted. But this man invented this action and created ICE. No matter how the design of the internal combustion engine changes, these 4 measures remain unchanged from then to the present day.

The great Leonardo is best known for his paintings, but he, in fact, was far ahead of his time precisely in engineering. Many of his ideas were so far ahead of time that they began to be realized in the XX-XXI centuries, such as the ideas of a hang glider, a helicopter, a submarine, concentrated solar energy, etc.

The Wright Brothers were American inventor engineers who created the first aircraft. Many others disputed this honor, but the Wright brothers made the first documented flight of a motor aircraft heavier than air. I can add that this airplane of theirs had “front horizontal plumage” (PGO), which has now become popular in fighter aircraft. Also, they actually invented a catapult launch.

Alexander Graham Bell is a Scot by birth, an American scientist, engineer, inventor and businessman who created telephone communications and, in general, created AT&T (American Telephone & Telegraph), laid the foundations for the telecommunications industry in the global economy. It is hard to imagine a modern world without telecommunication systems.

George Stephenson was a British mechanical engineer, the inventor of a steam locomotive and the founder of railway transport, one of the key participants in the world industrial revolution. By the way, he invented it to make iron rails, under which to lay wooden sleepers. And his track gauge of 1435 mm (4 feet 8½ inches, the so-called “Stephenson Track” or “Normal Track”) is still the standard in most countries of the world. George’s son, Robert Stephenson, who helped his father, gradually became as famous in the world as his dad.

Elon Musk is last on the list, but not the last in meaning. Born in South Africa, an American entrepreneurial engineer paving the way that is likely to influence the fate of the human race for years and years to come.

There is no doubt that his ambitions and the ability to turn them into reality are absolutely amazing. Tesla’s electric cars, SolarCity Solar panels, SpaceX, ideas embedded in Hyperlup – nothing seems unattainable for Elon Musk!